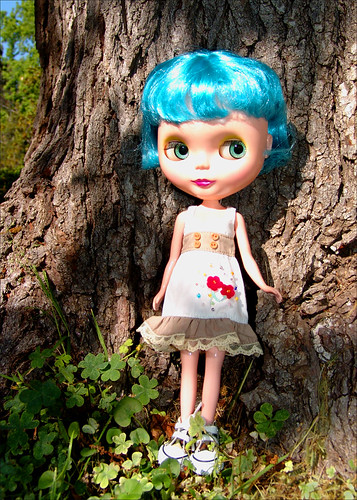 This is my first time trying to use Flickr. I thought it might be easier or more fun than Photo Bucket, but so far I'm not so sure. For example, what are these ugly purple frames around my pictures? Where did they come from? Does Flickr do this, or is it one of my Live Journal settings? I'd like to know the HTML that would allow me to put these up with a sliver of equal space in between each of the images, (Oh never mind I figured out how to do it myself,) and obviously without the ugly purple border.

Anyway, these are my latest Blythe images. These are all pictures of my Custom Blythe Ferris dolly by Lisa of Blythe Studio. In the big tree picture she's wearing her new sneakers by Mimiwoo. 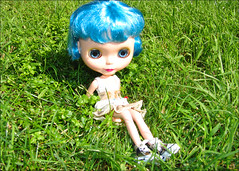 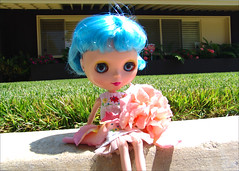 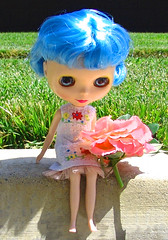 These are some shots I took of Ferris in my neighborhood. It's funny how people react to my getting down on the ground to take pictures of my Blythe doll. You'd think I was doing the weirdest thing, but I guess people don't get to see too many folks taking pictures of cute little top heavy dollies. 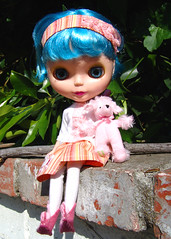 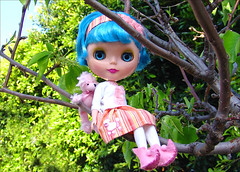 Ferris is wearing her wonderful Pinky Poodle outfit by Melissa2908. And these cute little handmade felt elf slippers were made by Three Green Bees. Aren't they cute? 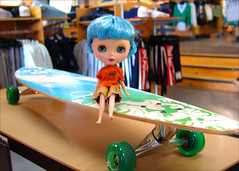 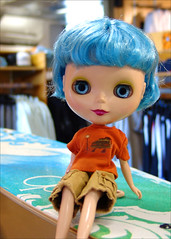 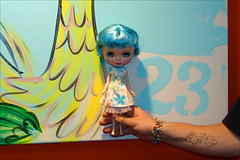 My friend Atra and her family gave Beau gift certificates, for his birthday, to this local skate shop, 9 Star. We went there with his friend Eric after school the other day. Beau bought several pairs of jeans for the first time in years and years. It's a great store, with tons of skate and surf gear, but it also has fun clothes. Out front there's a skate park and the kids are allowed to bring their skateboards and skate inside the store as well. I almost got the cutest, little, six-year-old Japanese boy to let me take a picture of him skating down a ramp holding Ferris, but he chickened out because he didn't want his older friends to make fun of him for holding a doll. I tried to explain the whole art of Blythe thing to him but he just said, "I don't get it." What did I expect from a tough little six-year-old skater? It would have made a great picture though. 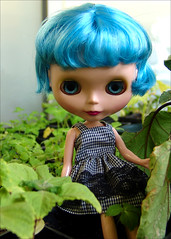 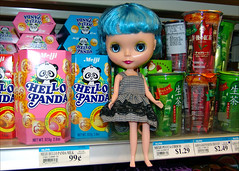 I had fun at the skate shop because the people who work there were really cool about letting me do whatever I wanted in their store, they were interested in Blythe, and they even helped me take pictures of her, which was pretty unusual considering how uptight and worried about lawsuits everyone is these days. But the most fun I had with Ferris was when I took her to our local Japanese market. I know that she's popular in Japan, because her being featured in a monthly ad campaign, for one of their largest department stores, is a big part of what led to her newfound popularity, but I didn't expect so many people to react so enthusiastically to my bringing her to the market. Everyone was so curious about her and all of the kids told their parents that they wanted one. Only one shopper knew who she was.

It didn't work out to be the best photo op, but I had such a good time talking with people, and I was thinking about how in the intro to Gina Garan's famous book about Blythe, she said that Blythe is all about love, in that she brings people together. I really got to see this in action when I was at this market. Whenever I take her anywhere people smile and look -- she causes a lot of attention for a bigheaded dolly with blue hair -- but here, at this market, people were soooo friendly, and everyone who saw her smiled and wanted to talk to me about her.

I have plenty of stories to share; there are a few more entries from our Hawaii trip, Beau just had his sixteenth birthday party, and there really isn't any new news about my Mom and her potential ovarian cancer, but I thought I'd try to have some fun and do something other than fight with people about whether Live Journal should permit us to use images of breast feeding as our default icons. Now I just have to figure out how to upload all of this without it looking as funky as it did when I previewed it just now. Ack, wish me luck.