Here's a live webcast from Burning Man pointed towards the center of the playa and The Man with Burning Man radio (BMIR, I think) and some radio communication interruptions. It's a little primitive still but considering that it's in the middle of practically nowhere, and we're not there with our friends, it's a nice way to be able to watch the burn and still feel connected. Here's another link if the first one isn't working, but I prefer the first, it's bigger, clearer and has less traffic.

Here's a link to TV Free Burning Man, check out the most current podcasts in the right hand 2007 column, you'll be able to see shots of The Man burning early on the night of the solar eclipse and the efforts to rebuild him. Right now he's standing and all but one of his green neon legs seems to be working. It's amazing considering how little time there was that they were able to mobilize and get him back up again.

It's a little hard to get that all of our friends are finishing up dinner, adjusting their lighting and costumes, and getting ready to head out to The Man to watch him burn. How did it all come and go by so quickly?

Beau is so upset that we aren't there but Mom needs us here and the money was so tight, to say nothing of my health. Although I really thought I would have had a surgery date by now. Today my hands were/are numb and tingly which is exactly what happened right before my big bad intestinal bleed. Kind of scary. I just upped my water intake, took some more prescription iron, and have been taking it very easy, which is not what I would be doing if I were out there.

If you've never been, please forget all of your preconceptions, and give it a chance. It just isn't like anything else and can't really be described, not even with words, video, photographs, or web cams. You really have to be there to feel what it's all about.

Hello to all of our beloved friends back home in the middle of the desert. Hello to the Favres, Hello Phil and Mara, Hello Kidsville! Hello Supersnail! We love and miss all of you!!!! 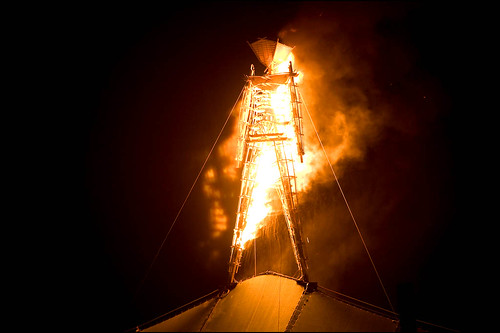 I didn't take this photograph. It was taken by Focalintent here on Flickr but I want to include it hoping he won't mind so I can show my friends what happened this year when some F*@&wad climbed up the man and torched it three days early. People are split into two camps about this; There are those who think it is in perfect keeping with the wild anarchist spirit of the event, and others who are deeply hurt and think this guy is a serious attention whore. I'm leaning towards the latter with the belief that everything unfolds as it is meant to. I just know we would have been so sad if we'd been there and lost our beacon for the length of time it took to rebuild him. 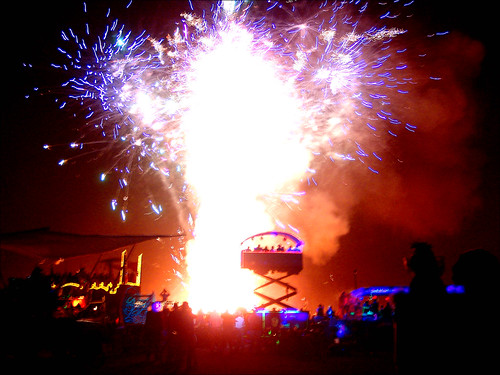 This is what I think of when I think of Burning Man burning. They pack it with so much dynamite and fireworks that at some point it just explodes. 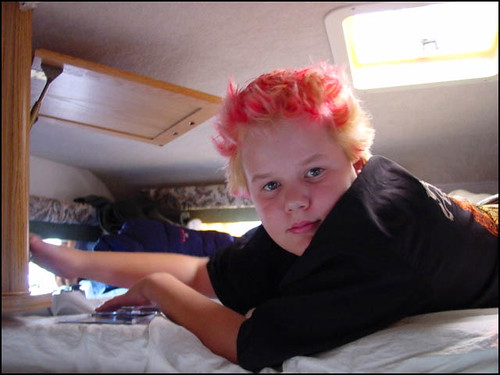 Beau In the RV Playing With His Computer Games. The first year we went to Burning Man was 1998 or 1999, I think, that year Beau dyed his hair green. The next year it was blue. We missed a year in there somewhere but this was the year he wanted to bleach it white and then paint it fiery, "Like The Man," but the bleaching process hurt so much he couldn't stand it and had them wash out the beach before it could get to that white shade he wanted so he wasn't too happy with his hair this year. He was also feeling really insecure about his weight. I don't care how he looks he's always beautiful to me. 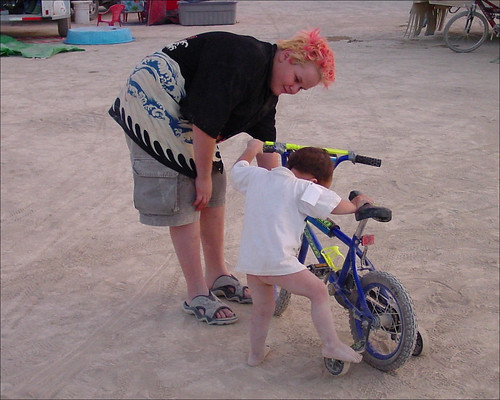 In Kidsville we all help each other and Beau is so wonderful, kind and generous. Even though this was years ago you can see how sweet he is. He was helping this little guy get on his bike. 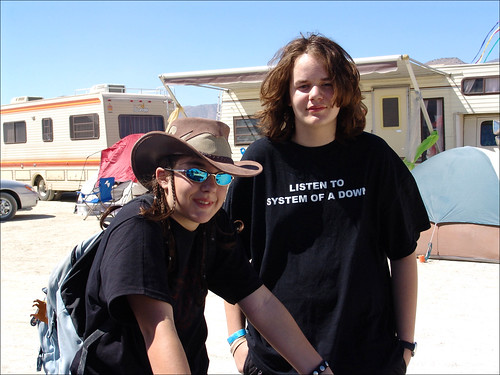 Here is Beau and one of his friends. Look how much he's changed from the first pictures. And to think, this is two entire years ago, so imagine how much different he looks from this now. I want to gather up and make a time line of his photos from every year he attended so people can see how much he has changed through the years. Going to Burning Man has been such a healthy life affirming experience in community, creativity, bravery and love for us. I am proud of being a parent who has taken her child there for so many years. 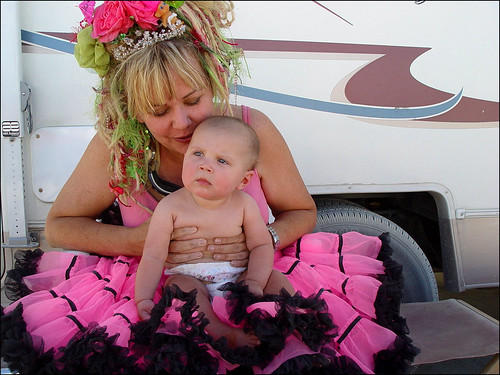 Here I am with my friend's baby. Isn't he the cutest little angel? We've had kids in Kidsville as young as three weeks old on up to eighteen and beyond. Our kids are growing older and want their own space now. Actually people have met out there, gotten married, made love, conceived, delivered and come back, so we've really experienced the whole circle of life. Scott, Beau, and I all got ordained as Reverends and Ministers with The Universal Life Church so we can marry people. Everyone gets married out there. I marry myself to babies, people, passing art cars, The Man, whatever catches my fancy. 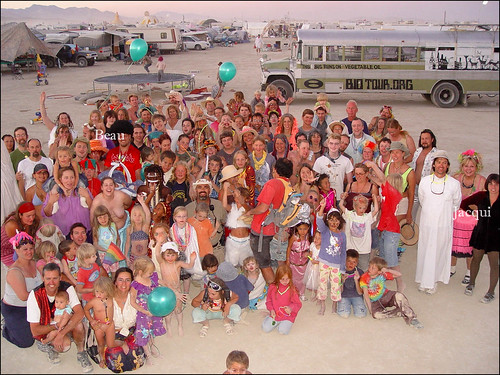 This is our group in 2004. And of course this is just the few people we were able to round up for the photo. People are mostly on Playa time out there so it's really hard to organize anything, especially a group photo shoot. Hard to believe it was just a few short years ago that there were just a dozen or less of us in a circle of wagons around a fire. We were KidsCamp then. 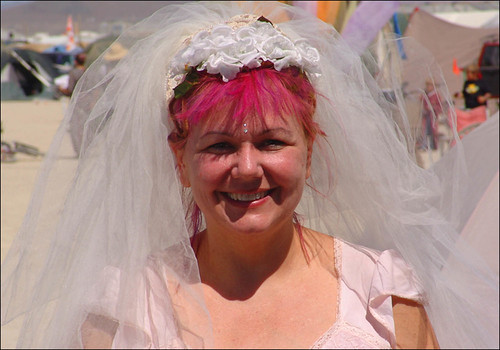 Here I am in 2005, the last year we were able to make it home. It was a pretty special year though because I got to meet someone I've been wanting to meet for most of my life, I'm adopted so I can't write about this. Last Summer I was in a serious car wreck on the 405 freeway and could barely get out of bed for a month or more so there was no way I was going to be able to do all of the preparatory work involved in getting ready for Burning Man, let alone drive a huge RV from Los Angeles through Reno to Gerlach and beyond. I miss it so much. I'm praying we'll come back strong in 2008.
Collapse