I have to get some sleep because I have to see four of the doctors who are the gatekeepers to my having lap band surgery on Monday. As long as I don't jump up on the psychiatrist's desk and start gobbling up her pens and pencils while shouting, "Yum! Yum!" or tell the nutritionist that I plan on hunting down the tiniest deserts I can find with the highest caloric density in order to keep my fat from burning off, I should be okay.

I haven't been able to write back to all of my wonderful friends here who responded to my last super long entry. Thank you! You gals/guys are the best, honestly, I love you all so much and am so grateful for your continued support and friendship. I feel so lucky and blessed that you hang in here with me through all of the ups and downs, the times when I can't write back and forget to wish you Happy Birthdays, and the times when I can.

That's what this surgery is all about, trying to turn the energy tide back in the other direction, taking my focus off of hiding out from pain and eating over it to push the feelings down, and rejoining the world. Losing just enough weight to be able to get out there and start exercising again and then get the knee surgery and the dental implants, and the boob lift and the tummy tuck, bwa ha ha, fun, fun, and more fun.

Ummm, not to jump on the judgment bandwagon and pick on poor Britney Spears because Lord knows she looks great for a Mother of two, and I can't do what she does, and I hate people who pick on other people for being anything less than physically perfect, but does anyone have any idea why she flashed her kitty again, (This makes four times for anyone who's keeping count,) just one day after the whole VMA debacle?

I feel bad for her, for how cruel Sara Silverman was, and the constant criticism and hounding she gets from the press, but at some point doesn't she have to take some responsibility for her behavior? Forget the VMAs, forget the hair shaving -- I actually thought she looked pretty cool with the shaved head and should have owned it and rocked the pixie look instead of hiding it under hats and wigs -- and even though I am a HUGE fan of nudity and think there is nothing wrong with seeing naked bodies at any place at any time, the world isn't like this, and if you're famous and you're going to flash, you know you're going to get harangued for it. So what is the deal? Does anyone have a take on this, or am I just stirring a super unimportant pot of soup here by even bringing this up?

BTW Scott looked really beautiful in the hot tub at his house tonight, but maybe that was my one little wine cooler talking ; ) Naaah, you really have to see those beautiful blue eyes in person to understand what I mean, plus I'm in love with him, but it's true that I've never seen a photo that does him justice, he is much more beautiful in person.

BTW I rarely drink. I just can't handle it, a few sips and I'm all over the man. I am such a cheap date. 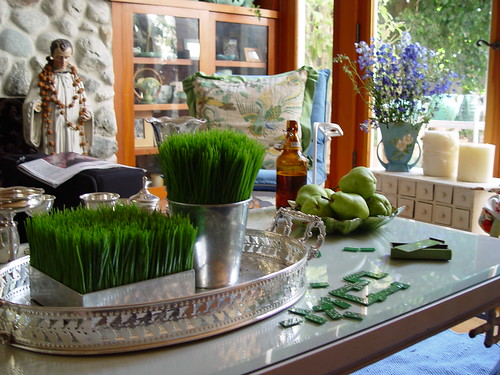 OH and hey, a photo I took of my living room was featured in a little article about coffee tables on the HGTV web site. It's actually a pretty crappy photo that I snapped off in the middle of a magazine photo shoot. You can see the photographer's beer bottle on the table and the newspaper that his assistant had been reading beside it. Kind of fun to have anyone interested in this though. Although, unfortunately, my living room looks nothing like this now due to much feline involvement in the rearrangement of our decor.

Speaking of cats, one of my little brown babies, who is available for adoption, snuck up on me tonight and bit down on my right nipple really hard with his tiny but super sharp little teeth, twice, and then turned around and bit my thigh. Man, that was painful.

I don't get it. I had taken my clothes off because it was hot and I couldn't find a clean sleeveless nightie. I've had cats do this to me before but only once and then they'd run off and hide under the bed after I yelped. Not this tiny little guy, he just stood his ground looking at me with a cocked head and then bit into me again, and then again. It's the Bengal in them.

Sorry, but Bengals are just too wild for me, they're beautiful, and I love the way they chatter away in this guttural wildcat sort of way and they have such spunk, but with the teeth marks I have on my nipple tonight I think I'll take a super domesticated alley cat over a wild cat any day. I'm so much more into the kind of cat who just wants to flop over and have his or her belly scratched, the kind of cat who wants to sleep on your pillow beside you at night, than the wild cat who runs up walls and does back flips in between attacking your feet and hands for making barely perceptible movements under the covers.

Wouldn't it be fun if you could prank your doctors, just say whatever insane thing comes to mind to freak them out? You should see some of the stupid questions on this long psychological evaluation form I had to fill out, things like, "Do you trust doctors? Do you dislike overweight people? Do you hate your body? Do you have an inordinate fear of needles? How do you feel about chocolate?"

Okay, off to bed, gotta get up early if I'm going to do any dirty dancing on anyone's desk tomorrow.