So there I was lying in bed "gorked" out on Vicodin, still recovering from surgery, and there came a knock, followed by a sweet teenagery, "May we come in?" And this is what came in. The cats couldn't scramble out of the way fast enough. 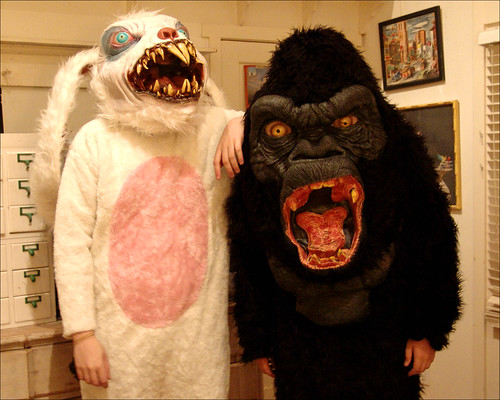 Now, remember I'm flying high on pain medication, while at the same time knowing that no one does Halloween quite like we do, and tick tock here comes October. So my first reaction was, "What the hell?", and then after I was able to catch my breath from laughing, I settled down and realized that this was just my beloved son and his friend Steven trying on their costumes, and not some tweaked out animal monsters from planet Sharp and Toothy.

The cats weren't too happy about it though. 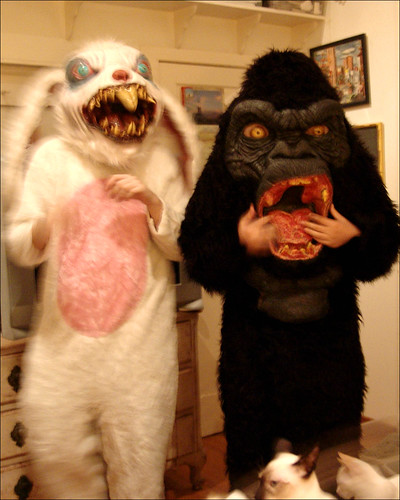 That's Beau in his favourite bunny costume, with a new and improved mask, on the left, and his friend Steven borrowing our big faced Gorilla costume on the right.

I spoke with my fabulous surgeon yesterday. I had my feelings hurt because I wasn't able to see him either before or after my surgery and we had been so friendly before. I was thinking, "What's the deal? Has he become so famous and important that he can't even talk to me any more?" Turns out that he'd spent a full twenty minutes chatting with me in recovery after the surgery, laughing and joking with me about the notes I'd written in Sharpie on my belly. He was surprised that I'd forgotten. I swear I have zero memory of this, ZERO.

He also told me that my surgery had been the hardest one he'd done all week. He said that my liver looked okay, (That was a concern of mine,) but that he'd had to do a lot of cutting and working around scar tissue because there were so many adhesions. Ya think that explains why I'm in so much pain?

I'm laughing at all the people who said, "Oh, lap band surgery? You'll be up and ready to work the next day. Hell, I was bouncing up and down on a trampoline and making love from a swing by day three" Har dee har har, yup that's me laughing. Man, I was barely able to do the marketing and go to the bank with Scott yesterday.

I've been forcing myself to walk, but thank God for the Super Glue they used to put all of these many incisions back together; Super Glue, Valium for the pinched nerve and back pain, and Vicodin for the feeling that someone on massive doses of steroids threw a medicine ball at my abdomen.

BTW, just in case anyone thinks I'm whining here, far from it. I know how lucky I was to be able to afford this surgery, and to have survived with my health intact. Hey, as long as I have the full use of all of my senses I'm happy and grateful. I just wouldn't mind chewing something, but liquids are working for me for now. Maybe I can blend up some Captain Crunch and Nestle's chocolate chips? Just kidding. Seriously, I'm drinking water, soy protein drinks, vegetable soup, pinching my nose and tossing back the foulest tasting vitamin supplements in the world.

My Mom, Scott, and Beau have been wonderful. It's going to be a race to get well in time to clean this place up and get it decorated in time for Halloween.

Okay, I think I'll collapse in a heap now.