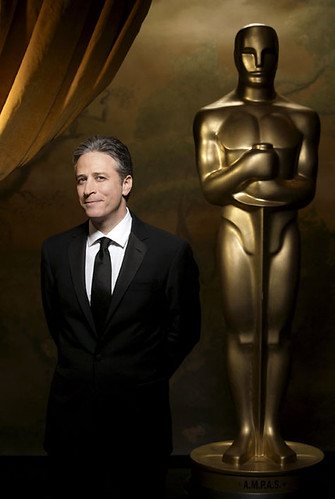 "Democrats do have an historic race going. Hillary Clinton vs Barack Obama. Normally, when you see a black man or a woman president an asteroid is about to hit the Statue of Liberty. How will we know it's the future? Silver unitards, that can't be all?" — Jon Stewart.

Here's a super snarky, semi boy's-club-but-for-the-presence of-Lauren Kirchner, real time, Oscar blog-fest transcript. Phew, I had to take a breath after that sentence there, pant, pant, pant. I actually kind of enjoyed reading this because it reminds me so much of the kind of banter that goes on at so many of the Oscar parties I've hosted, or been to, over the years, (Man, I used to be competitive about guessing the winners), which is why I want to share it with you.

Just ignore some of the meaner stuff about Diablo Cody, (I think she's a total breath of fresh air), and Helen Mirren's breasts, (I think they're beautiful -- I wish I looked like her and had half her talent, wit and grace. She's loveliness personified and frankly I'd marry her in a hot minute if she asked me to), and I promise you, you'll get a few really good laughs out of it.

236 The Room -- The Oscars: There Will Be Liveblogging

I was trying to explain this to Scott tonight, that I hoped he wouldn't mind if I wanted to be temporarily snark/gossipy, while at the same time respecting my need to concentrate and cry along with some of the winners when they get earnest and sentimental.

Here's Jon Stewart's take on this;

"In case you're wondering what we all do here during the commercial breaks, mostly we just sit around making catty remarks about the outfits you're all wearing at home."

BTW my Mom's power went out early this afternoon and when I called the power company for her to see if it was an outage it occurred to me what a truly big deal a thing like this would be for all of the many people whose careers hinge on this event, and for the many people hosting lavish Oscar parties. My Mom lives in Bel Air, her neighbors are among the wealthiest and most successful people in the film industry. To say that these folks take their Oscar viewing very seriously would be a major understatement.

Apparently people were already freaking out by the time I called because the poor customer service rep who took my call told me she was getting some really nasty calls from people concerned about their caterers being able to prepare food, to say nothing of the seismic disturbance that would occur if people weren't able to turn on their giant flat screen TVs at 5:30 PST to watch their film, or client, get a big fiscal Oscar bump from winning one of these highly coveted awards.

Over a billion people watch this show. That's really staggering.

My favorite acceptance speech of the night would definitely have to be Tilda Swinton's; 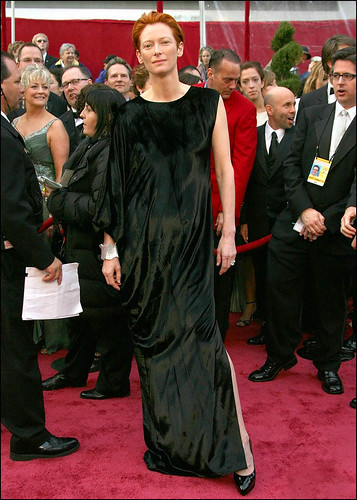 "Thank you. Oh nooo... (To her statuette) Happy Birthday Man. I have an American agent who is the spitting image of this. Really truly, the same shape head, and it has to be said... the buttocks, and I'm giving this to him because there's no way I would be in America at all ever on a plane if it wasn't for him. So Brian Swardstrum I'm giving this to you. And Tony Gilroy walks on water, it's entirely official as far as I'm concerned. And Jen Fox and Steve Samuels our incredible producers, and Sydney Pollack, (She makes a gesture of respect), and George Clooney; You know, the seriousness and the dedication to your art, seeing you climb into that rubber bat suit from Batman and Robin -- the one with the nipples -- every morning under your costume, on the set, off the set, hanging upside down at lunch. You rock, man. Thank you! Thank you! Thank you!"

I love this woman. I love that she wears what she likes and doesn't wear makeup, or at least not much of it. I love that she makes unique film choices and creates performance art. Anyone remember the nap in the box she took at The Serpentine Gallery, I think? I've been following her around since Orlando.

I've been watching this show for more than thirty years now. I don't think I've ever missed a year, nope, I'm pretty sure I haven't. The closest I've ever come to attending was when I was dating Marty Passetta, whose Dad directed The Oscars for many years, but I didn't even give it a thought at the time. Seriously. I was a girl in love, but then a mean mutual friend managed to convince Marty that Oscar usery was the only reason I was going out with him. Wrong. I loved Marty. I had a dream about him one night and that was it for me, I was smitten. He was the boy almost-next-door -- more like the boy-who-lived-way-down-past-the-Bel-Air-Hotel-on-Stone-Canyon, but I loved him in my Catholic high school girlish way and he was the first boy who broke my heart, yep. One minute he was writing me love postcards, and the next minute he hated me because a mutual friend got in between us.

The second time I almost went to the Oscars was when Scott almost got us tickets while working for a super prominent law firm that represents The Academy -- apparently they get an allotment of tickets and many of the lawyers couldn't care less about attending. But it didn't work out.

Oh well, one of these days, eh? I'd rather attend as a nominee anyway. Although I've had to lower my sights from weeping while thanking everyone I know before they play me off for Best Actress to boring the shit out of everyone while I desperately try to convey the important meaning behind my documentary short subject. Dream on girlfriend. I'll probably be dreaming my way to the grave.

Meanwhile lounging around at home, watching (and recording) everything on a good sized HDTV, while eating Oscar themed food, (Always have to find a way to tie in guacamole because The Oscars without guacamole just wouldn't be the same to me), and judging people's attire works for me.

I wish they'd cut out all of the production numbers and most of the montages, with the exception of the annual tribute to people who have passed away, (BTW where was Brad Renfro?), and give the winners more time at the mike. Although for once it seemed to me that they were just a tad gentler when it came to playing people off, and I so appreciated Jon Stewart bringing back Marketa Irglova, that lovely woman who was denied the chance to say thanks when she won for best song, and giving her the opportunity to say her piece. I think that's an Oscar first. And honestly, I next to Tilda Swinton, who I adore for being such an iconoclast, I think her speech was the best of the night.

"Hi Everyone. I just want to thank you so much. This is such a big deal, not only for us, but for all other independent musicians and artists that spend most of their time struggling. This - the fact that we're standing here tonight, the fact that we're able to hold this - it's just to prove, no matter how far out your dreams are, it's possible. And, you know, fair play to those who dare to dream and don't give up. And this song was written from a perspective of hope. And hope, at the end of the day, connects us all, no matter how different we are."

Now, with regard to this whole Gary Busey kissing Laura Linney, Jennifer Garner and upsetting Ryan Seacrest brou ha ha, it all seemed a little unfair and facetious to me. I mean we get all misty eyed and give standing ovations to people who have survived terrible accidents, illnesses, and old age, but we can't cut a wonderful veteran actor like Gary Busey, (who we all know suffered major brain trauma as a result of his motor cycle accident) some slack?

All he wanted to do was congratulate Laura Linney and say hello to Ryan. He didn't even know who Jennifer Garner was. But I'm sure he didn't mean any harm. He did the same thing to me years ago when I was working at Century Cable. He was a guest on one of our shows and when I told him I had followed his career and loved him as Buddy Holly he gave me a big kiss and sang one of the songs from the film for me. He was generous and sweet as hell, not at all lecherous, just not too present spatially, you know? Not very aware of social boundaries. Big deal. I still respect the man.

I could go on for hours. I have so much to share. I made it a point, as I always do, to see every nominated film, but I have to get up early tomorrow to look for homes for cats and take my Mom to the oncologist. I'd just like to say that, as a country, if our films are a reflection of the way we feel and the times we're living in, we must be feeling pretty defeated, depressed, and grim. Or as Jon Stewart said;

"Tonight we look beyond the dark days to focus on happier fare: this year's slate of Oscar-nominated psychopathic killer movies. Does this town need a hug? What happened? No Country for Old Men? Sweeney Todd? There Will Be Blood? All I can say is, thank God for teen pregnancy."
Collapse