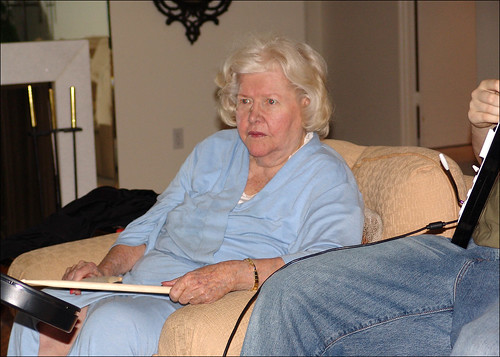 Hi Everybody, Thanks as always for your wonderful comments. I read all of them and am so grateful. No, that wasn't me in the music video, but I wish it was.

I can't write back to everyone individually because I HAVE to get some sleep. Mom was admitted to UCLA through the emergency room early this morning after a long, grueling, day-into-night-into-early-morning wait for a bed.

I spent yesterday running errands for Mom and fielding phone calls from doctors and nurses, but when I got to her house with my arms loaded up with romance novels on tape, medications, vitamins, cold and flu remedies, things that her temporary caregiver asked me to pick up for her, a commode, extension cords for the new TV, and other assorted things, all I had to do was take one look at her and I knew she needed to go to the hospital.

She felt hot. She was weak and she was coughing. I told Susan, her new care giver that she had a fever and Susan disagreed with me, but I know my Mom, I know how she feels and how she normally looks and I just knew. So we began the arduous process of getting her dressed and moved to the hospital, poor thing, she was so weak and everything was difficult and painful for her.

If UCLA were a hotel they would hang a sign around it's neck saying, "Booked Solid For the Foreseeable Future, Go Away." But I did have a really moving series of exchanges with a beautiful deaf woman and her two daughters. I only know a very few words and phrases in ASL, and Beau and I can finger spell the alphabet, but I've never really followed my heart and focused on really learning how to communicate, even though I really want to.

I think sign language is one of the most beautiful forms of communication. Watching someone sign is like watching a totally unique form of expression in terms of personality. It's so cool because we are all so accustomed to perceiving people through our ordinary methods of communicating, primarily through speech and sound, but ASL relies so heavily on these incredibly lovely and super intuitive gestures and the way someone does this really reveals so much about them, about how they are feeling and what they are thinking and it's fascinating to watch.

The super pretty young woman who was helping me communicate with her Mom who was laying on a gurney in one of the hallways, (the whole no room at the inn thing), signed so beautifully, so expressively, and so fluidly that it looked like ballet. The movements of her hands were like birds in flight. Just... lovely. And the sweet and meaningful, soul enriching exchange I had with her Mom, the bond we formed over our mutual love of cats, was just so wonderful. I got to tell her that one of my favorite sounds, along with purring, applause, the ocean, and babies laughing, is the sound of deaf people laughing. God, I love that sound. It makes my nose tingle. A bright spot in an otherwise super cloudy day.

Oh, there's so much I have to tell you, want to tell you, but my energy is completely drained from my body, and I am having some minor cosmetic surgery (Fraxel laser) tomorrow that is so beyond ridiculously expensive that there is no way I can afford to reschedule it. I've had pretty bad acne and chicken pox scars for all of my adult life, and had been wanting to do one of those painful oozing chemical peels for a long time but was procrastinating out of fear of the pain and the months of recovering with a swollen pink face, but then this amazing laser came along. By tomorrow night, providing Mom is comfortable and stable, and I don't need to go to the hospital to talk to her doctors in person, I'll be lying here in bed with my face on fire. This time I know to have pain meds on hand.

In order to really make a difference to the quality of your skin, on a level comparable to a full chemical peel, you have to do this once a month for five months. A dear friend of mine did it and after I saw what it did for her I was sold. Acne, aging spots, wrinkles, gone, and in their place is skin that looks renewed and fresh and about ten years younger. I've been wanting to do this for sooo long. I had one treatment about two months ago and couldn't schedule the second until I had the money and was certain Mom could spare me for a couple of days. I sure guessed wrong on the second count.

In any case she's doing better and she's in excellent hands. I've spoken with her doctors and nurses and I have a care giver sitting beside her. She'll be able to spare me for a few hours tomorrow, but believe me, I'll be worrying about her.

Her lungs and her heart really just can't handle this damned virus she caught from a super incautious and inconsiderate Rosa, grrr, again. It's awful, but her oncologist and I are both praying they'll be able to "patch her up" (his expression) and send her back home again so we can buy a little more quality time for her.

She thinks she's going to die and refused to leave her house yesterday until I could get her lawyer on the phone and have him dictate a draft of an amendment to her will that she could sign, sigh.

God, I wish I had the energy to tell you more, so many good stories to share. If I'm not in as much pain as I was the last time I did this I'll try to check back in and respond to your wonderful comments tomorrow night.

I Love You Guys,
Jacqui

PS: These are pictures of Mom, my seventeen-year-old son Beau, and my boyfriend Scott playing Rock Band at our house in the desert last Thanksgiving. How cute is my Mom to be playing the drums with them? All three of them are so much more attractive than they appear in these photographs but I so wanted you to see them that I decided to put them up without trying to edit out the red eye and everything else. 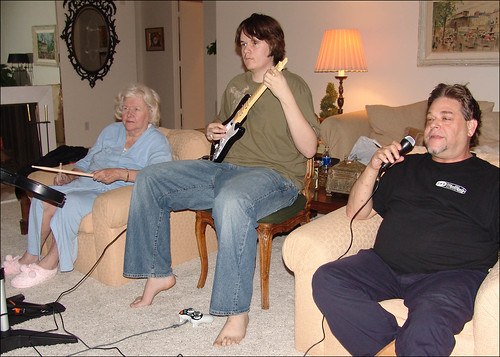